A whole series of my work has been inspired by a drawing of my father’s from 30 years ago. His original was based on visually extracting shapes from a classic Tumbling Blocks schema used in drawing, painting, patchwork and many other formats.

This is his drawing on paper in ink and two thicknesses of line. 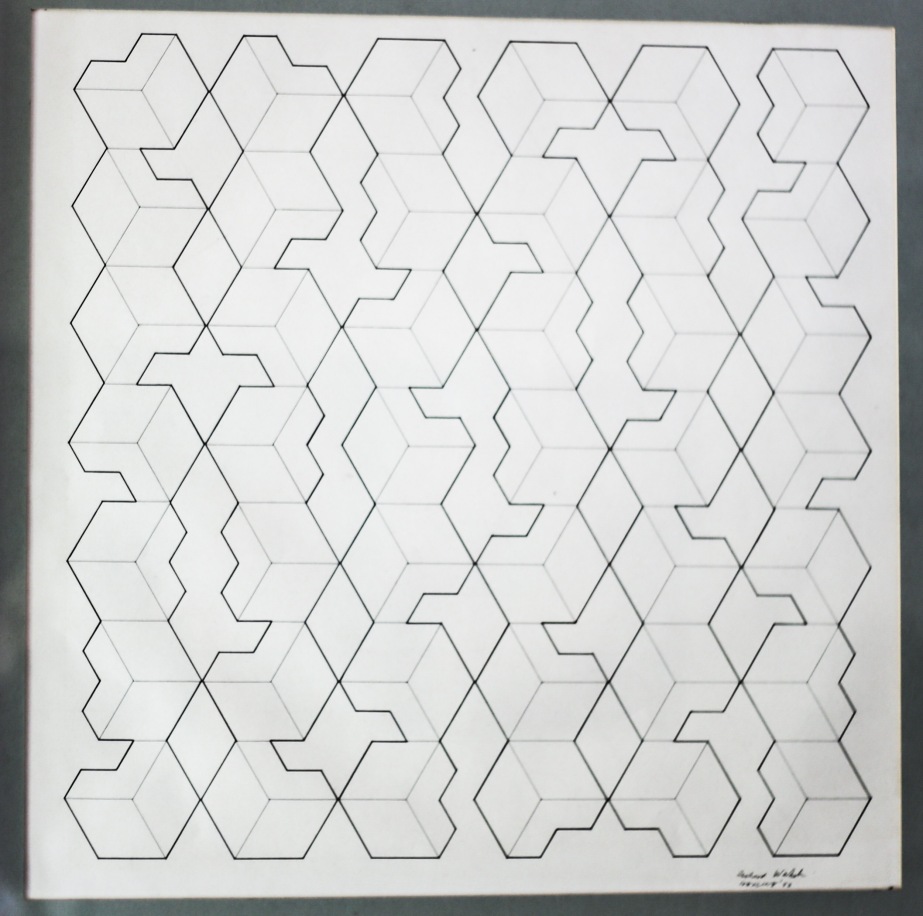 I have made a number of drawn versions of my own.

After many other versions in drawing, painting and cutting I have now embarked on a low relief version in painted plywood. The pieces were cut out usung a tiny reciprocating jig-saw that my mother owned from the mid ’80s.

Here are some of the stages I have passed through. Hopefully tomorrow it will be finished.

Often when driving along the strait flat roads on the volcanic planes, I saw red rust like stains in the frequent drainage channels, so I presume there is red oxide in the soil but mostly the red one sees is in rusting objects such as corrugated roofs of agricultural buildings and the like. 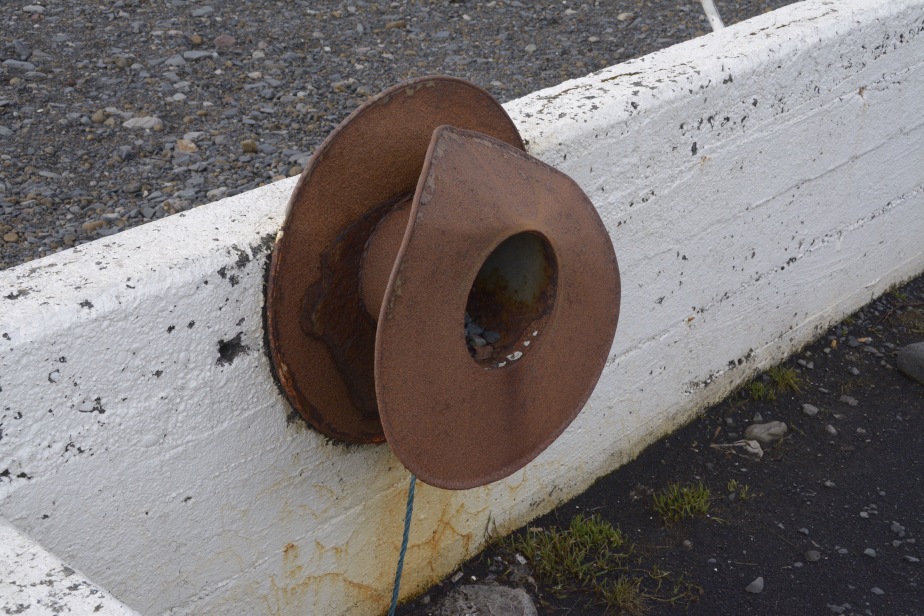 An old hose reel in a disused petrol station 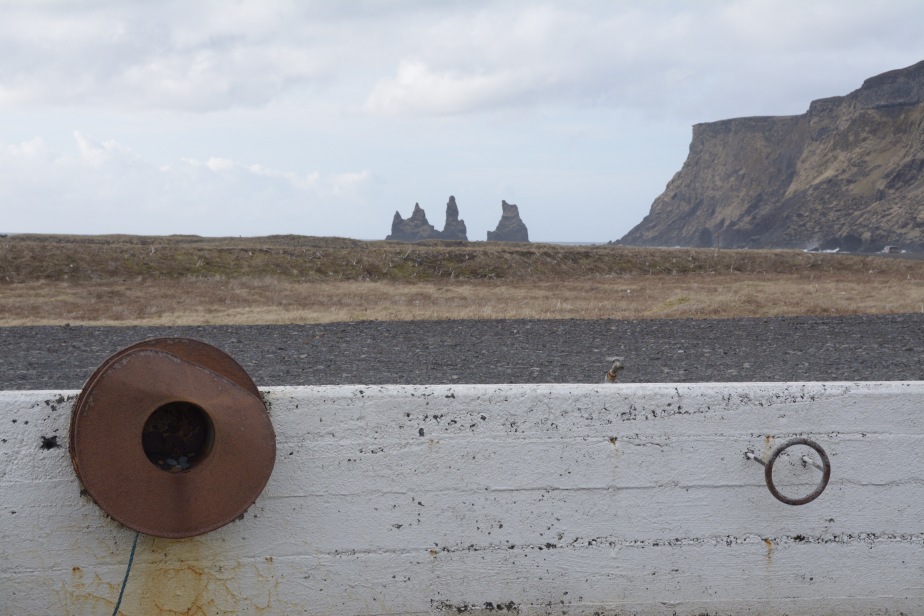 The basalt rock stacks which were once part of the Reynisfjall cliffs at Vik, now eroded by weather. 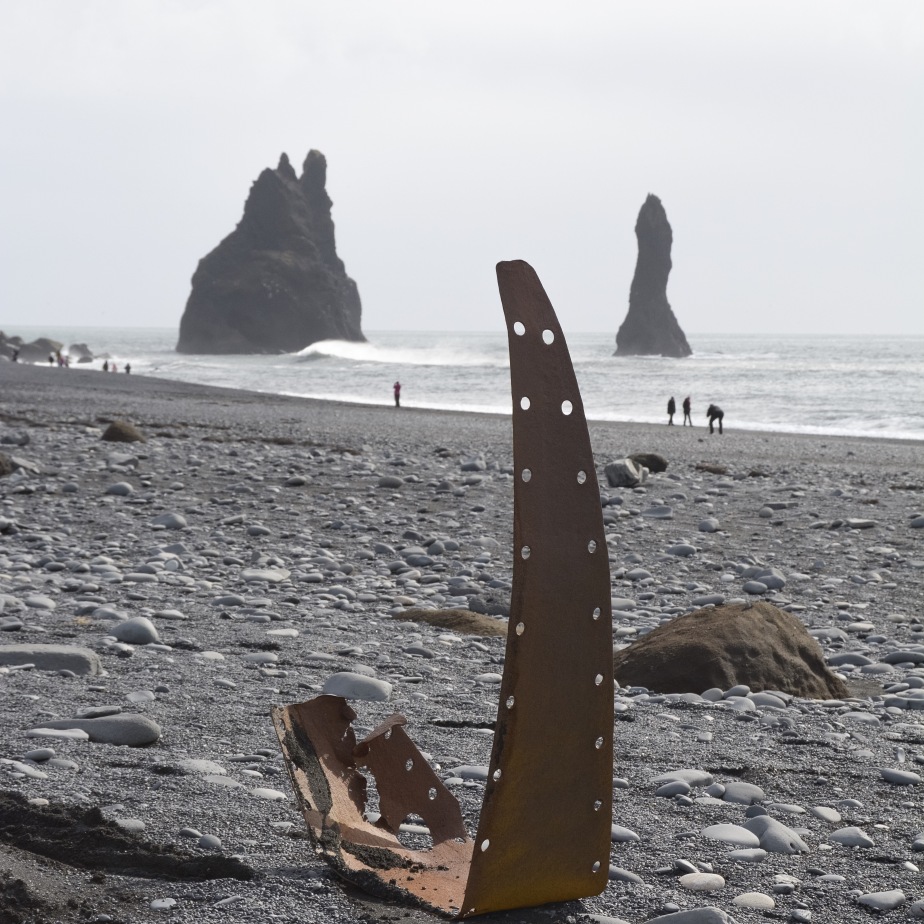 A strange section of rusting metal I found on the beach at Reynisfjall, I upturned it to photograph it seen between the basalt stacks. 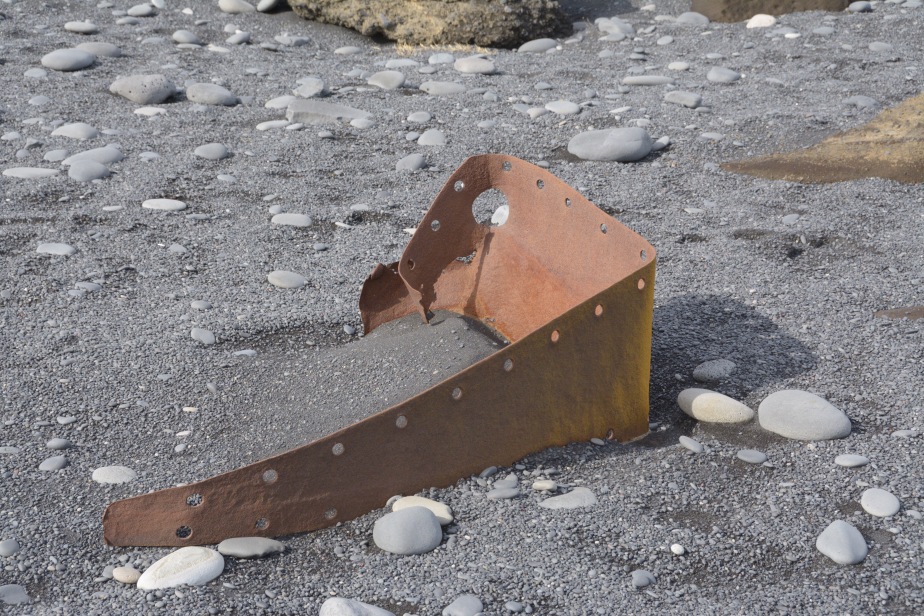 This is how I came across it, nestled into the black volcanic sand and stones on the beach. I left it standing proud in the landscape. 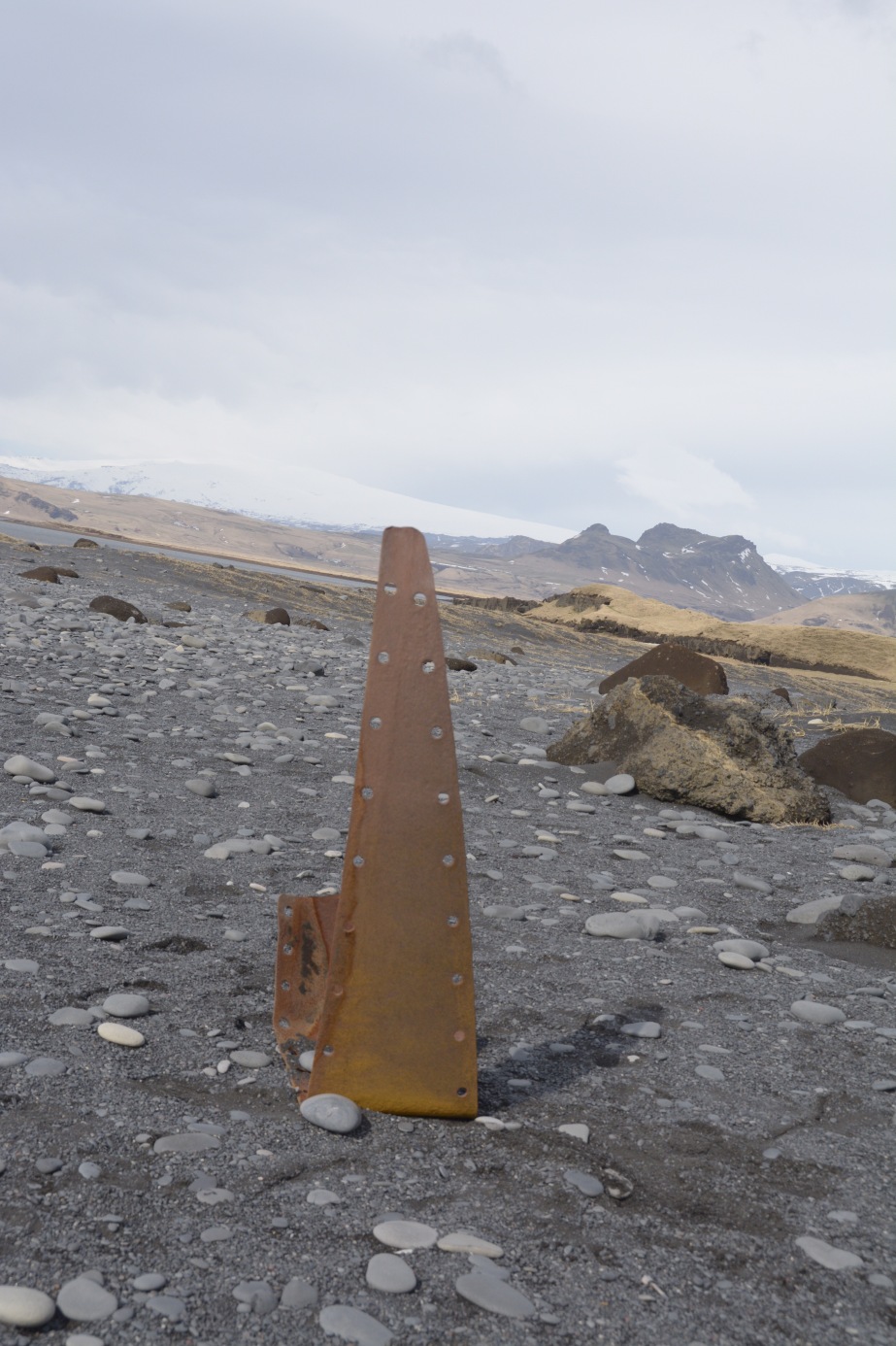 A viewing platform at a waterfall, a superbly geometric foil to the randomly rushing water . 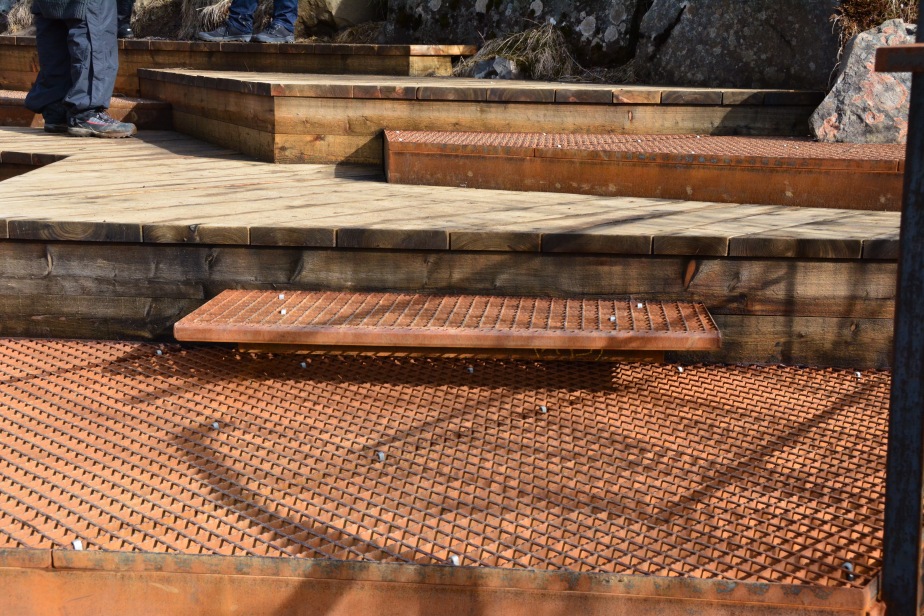 And finally the glorious red of the sunset over the extraordinary cliffs at Nupar, Kalfafell. 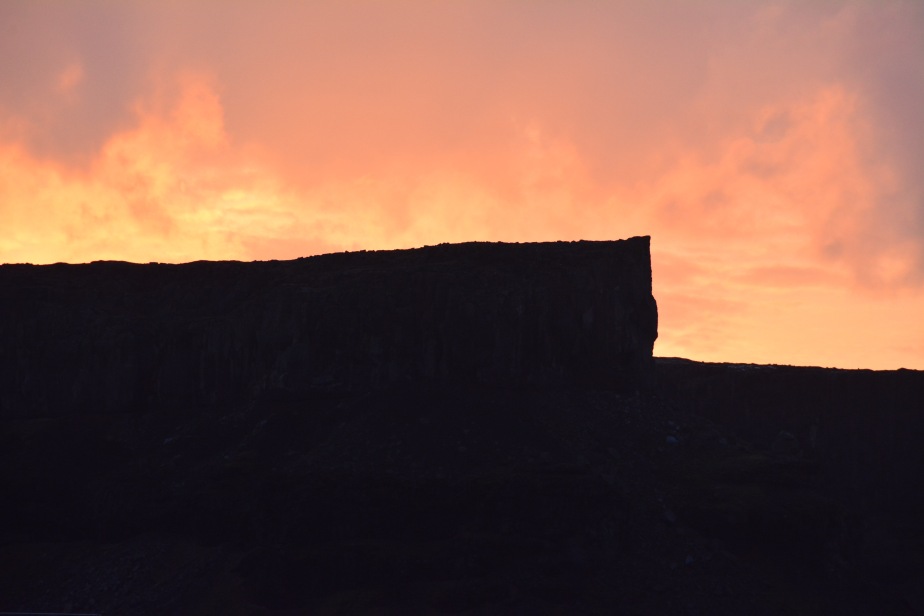 I had an idea to carve multiple grips on a cube of wood, it is 70mm, just the right size for a handhold. One at a time I persuaded 6 people to grasp the block while I traced around their fingers and thumbs. Carving out search set at a time, I was able to keep the sets from overlapping too much. One grip is like that of a cricket ball, finger tips only, another held it just with thumb and forefinger, then a variety of different holds but only one left-handed. The sizes varied quite a bit too.

I wrote their names near their thumbs whilst I was carving but I might sand those off. It’s interesting that everyone found their finger holds easily if they began by finding their thumb position. 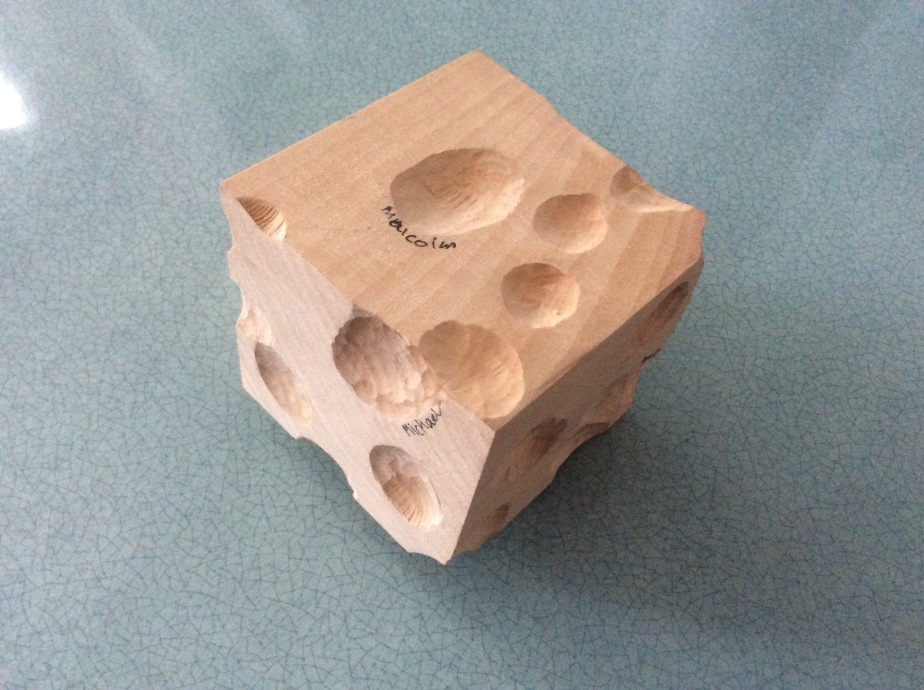 Lime wood is great to begin with as it is very smooth,  fine-grained and really quite soft hence easy to cut. I started with learning to cut straight gouged lines along the grain. The wood naturally curls up as it is cut, I thought about leaving the little coils attached as they looked so good but they’re very brittle and would have fallen off very soon anyway. 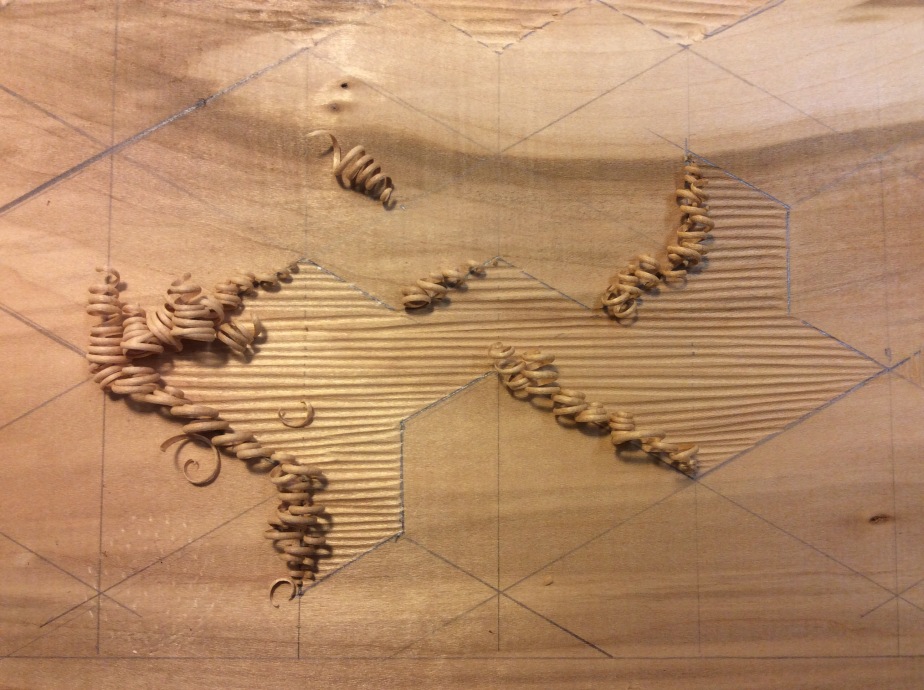 This is my first time on a wood carving course. I am being taught by Malcolm Martin, he and his partner are pass masters, what a joy to be taught by such a talented man.

This is my first proper attempt, about an hour in, lots more very tricky cutting to do. I have made a rod for my own back as the whole piece is only the size of a postcard, wish I had made it larger. 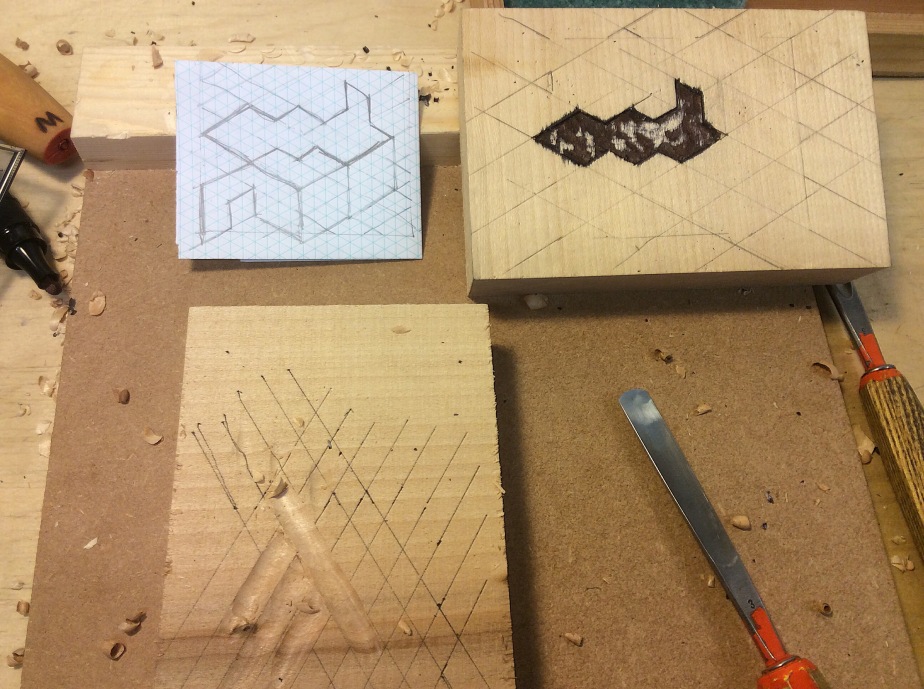 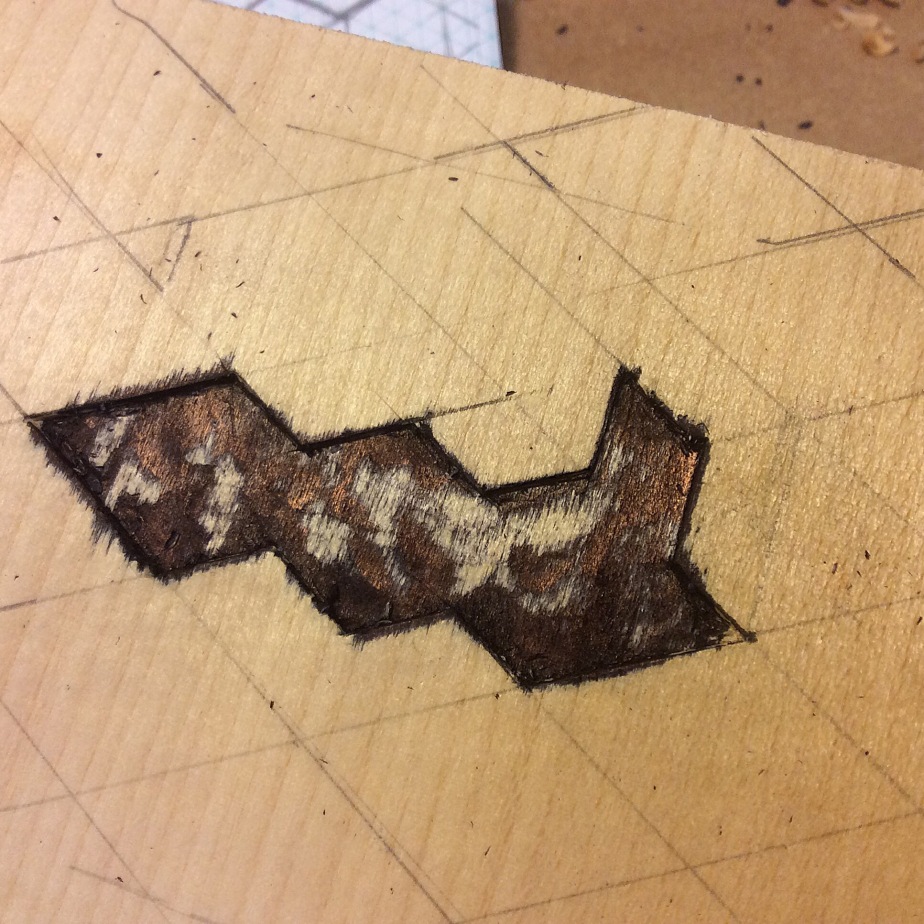