I have been taking photographs on the streets at night with a small group of people. I happened to capture this group of running figures and heard some shouting.  On waking the next day I found this part-story already formed in my head. I don’t know yet if there will be more to come but let me know if you find it intriguing (or daft!). 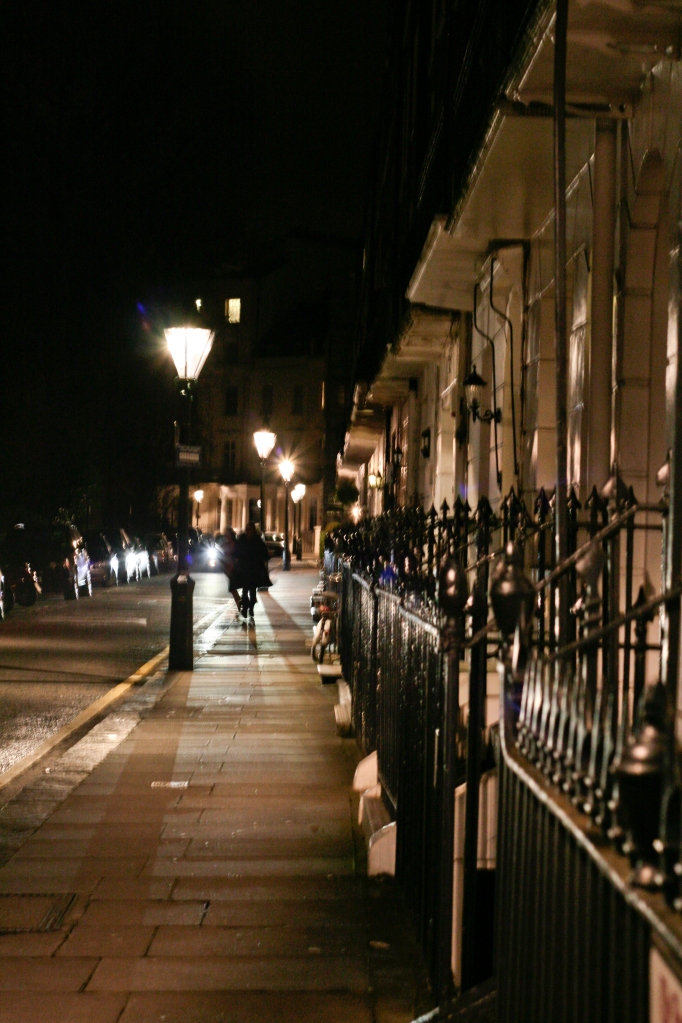 It was a wet, cold night in February the kind of night where puddles lie full of wild reflections flickering with vivid colours. Brompton Square was a good address in a respectable area of London but if you look hard enough you’ll find something dark behind the curtains.
I waited at the Cromwell Road end of the Square the damp creeping into my shoes. I was sure that something was going to kick-off.  I knew the where and the likely when but not the what.
I had a clear view down the brightly lit terrace of stuccoed Regency houses. Rows of wrought iron railings and shiny black doors where the lions-head knockers kept their polished eyes on the street. A London cab was parked down the far end the headlights throwing everything in their path into silhouette. Two men in dark overcoats and a woman with flesh-coloured tights were strolling towards me, just as they passed under the street light, I snapped a discreet shot or two of their faces from low down by my waist hoping they wouldn’t notice. A group of dark-coated figures standing far down the street were huddled too tight to count.
The first group walked passed me disappearing into the rush hour throng on the Cromwell Road.  She gave me a bit of a sideways glance sending chills down my back, did she recognise me? Soon a car pulled up opposite No57. A middle-aged man got out, walked over to the house and with a fumbling at the lock with his key he pushed open the door. I caught him in my view finder and clicked twice, once at the fumble and then again as he slipped into the bright hallway the door closing behind him. This was the right place then, he was wearing a hat. I was expecting that.
Ten minutes later I moved out of the shadows and crossed the street to the corner, hovering for a last look, maybe this was a mistake after all. It was right then as I turned to go that it began. A figure of man with a fur-collared coat was briefly lit by the shaft of bright light as he came out into the street from the corner house. Shouts and dull thuds of punches or baseball bats on flesh came from the far end. The taxi revved and sped down the street in my direction. The huddled group had burst apart, figures were leaping the railings into the central gardens. Three more were running fast as hell towards me coats flapping in crow-like panic. It was now or never. I got just one shot but you couldn’t see their faces.  I didn’t stop for a second shot, I needed to keep out of sight. I turned quickly out of Brompton Square and up towards Harrods melting into the crowd. They’d be after me for sure if they’d seen me.

The next morning I read the newspaper version of what had gone on down there in genteel Knightsbridge and there were my photos. I had sent my three good shots to my contact and he’d passed them on.  My job had been to prove that certain people had been in that place on that night. The man in the hat from No57, the woman in the flesh-coloured tights and the running group. I didn’t ask why, the less I knew the better.  It would be a long time before the whole story came out but by then I was a long way from there.