I have been casting plaster into ice cube trays, these long sticks, triangular in section, make for interesting shadows. I made them in two sessions, the first set were marred (or so I thought) by air bubbles interrupting the ridge but having now been looking at them for some time, I like the randomness of the negative spaces. The second set were almost perfect though some have lost their corners. It was only after having photographed them that I saw the similarity to an large work in wood by Susumu Koshimizu 1971 – ‘From Surface to Surface’ that I had seen at the Tate Gallery.  From the label – ‘Koshimizu investigates the substance of wood by sawing planks into different shapes, exposing their surface qualities through different kinds of repetitive cuts. The geometric lines produced by an industrial saw contrast with the slit irregularities resulting from missing chips, slips of the saw, and rough surface of certain edges. Koshimizu was part of Mono Ha (School of Things), which reacted against the embrace of technology and trickery in mid 1960s Japanese art. They sought to understand ‘The world as it is’ by exploring the essential properties of materials, often combining organic and industrial objects and processes’
Having now reread the information label I am pleased to discover that we had in common, not only looking at repeated regular forms but also of their inconsistencies and flaws.  The particular reason for photographing  this work  was for the shadows that were being cast on the white walls by the multiple spotlights above. I can count 5 in this photo but I think there were more. Lighting my castings with several sources is something I must try. 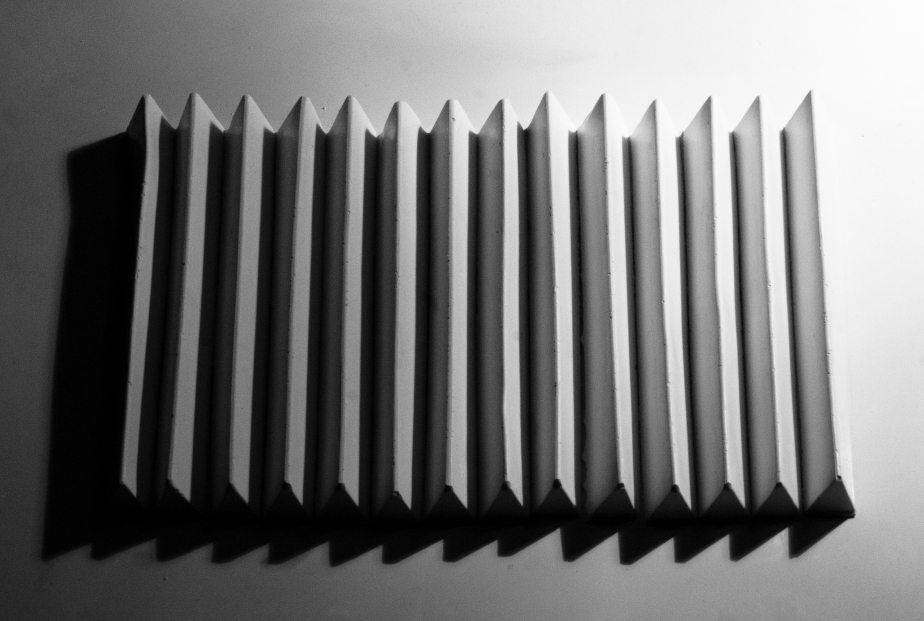